The following is an excerpt from The Center Of the Sunlit Sky by Karl Brunnholzl. This course is an exposition of the Middle Way philosophical tradition, based on Part One of The Center of the Sunlit Sky, expressed as the ground, path and fruition of Madhyamaka. Students explore classification of knowable objects into the two realities and cultivate certainty in the view of emptiness of all phenomena, formulating the five great Madhyamaka reasonings. The course includes presentation of personal identitylessness, the sevenfold analysis of the chariot.

No Ground For The Two Realities (PART 2 of 2)

Thus, common worldly consensus in the Centrist sense primarily refers to the very basic things that we perceive and label by taking them for granted, usually without even thinking about them, such as that we eat when we feel hungry, that fire burns, that water flows downhill, that there is a world of people out there who are different from ourselves, and that we want to be happy and avoid suffering. These appearances of seeming reality are what determine our ordinary behavior. If they are not analyzed, they seem to be there and—mostly—function as we expect them to. Usually, our bodies are still there when we wake up in the morning and function in the same way as yesterday. Then, we feed them and take the same road to the same place where we have been working for many years. However, as soon as we start to analyze these appearances for what they really are, they start to lose their characteristics and functions, because we step out of our familiar frame of reference within which these appearances manifest and operate. This is also obvious from modern science: For example, according to quantum physics, there are no such things as matter, roads, cars, or bodies, so who or what is driving home after an exciting day in the quantum lab? On the other hand, subjectively, we do not live our lives by behaving as quantum fields or the like. We do not relish quarks and energy waves but eat pancakes and drink coffee. Thus, one could say that common worldly consensus is mainly that which we take for granted in our everyday transactions and which functions accordingly as long as it is not questioned.

In more technical terms, the Eighth Karmapa says that “worldly” refers to all mental activities under the sway of afflictive and cognitive obscurations through which the dualistic appearances of apprehender and apprehended on the level of seeming, worldly reality are imagined, as well as all thoughts and expressions in dependence on this imagining that are used by those who experience dualistic appearances. On this level of the worldly seeming, the conventions of everything in both the world and the treatises that is already consensus or suitable to become some consensus are called “the conventions of the worldly seeming.” As Santideva says:

The one of yogins and the one of common people.

Here, the world of common people

Is invalidated by the world of yogins.

Also the yogins, due to differences in insight,

Are overruled by successively superior ones. 279

All presentations of the inexpressible and inconceivable that are made from the perspective of ordinary beings by conventionally referring to “ultimate reality” are nothing but a futile attempt to write words onto space.

The Centrist presentation of the two realities is in no way established as a Centrist system of its own. Rather, such descriptions are used as mere labels. When they are analyzed, neither a defining characteristic nor an example of ultimate reality can be found. Thus, all that is left on the side of Consequentialists in their communications with others are mere nominal definienda that give the impression of being defined by certain defining characteristics. However, since such names are also empty of a nature of their own, ultimate emptiness is even beyond being an object of the wisdom of noble ones. So how could anybody find a nature that makes up or defines this emptiness?

One might argue with the Consequentialists’ refusal to take a position regarding the ultimate by saying, “As was said above, the defining characteristics of ultimate reality are that it (1) cannot be invalidated through reasoning, (2) withstands analysis, (3) abides ultimately as an undeceiving nature, and (4) is the object of an unmistaken subject. So, ultimately speaking, is there such a phenomenon or not? If there is, you Consequentialists are realists.280 If there isn’t, the presentation of the two realities is meaningless.” The Eighth Karmapa responds that Consequentialists do not claim that, ultimately, there is an ultimate reality that is endowed with such defining characteristics, since they also do not claim that, ultimately, there is a seeming reality that has the opposite defining characteristics. The reason for this is that both realities are just presented in mutual dependence. Moreover, it is not only impossible to establish an ultimate reality with such defining characteristics through any valid cognition whatsoever, but the notion of such an ultimate reality can also be invalidated through reasoning. Thus, the two realities are primordially natural emptiness in which all flux of mental reference points is completely absent, be these subject or object, defining characteristics, definiendum, and example; or valid cognition, what is to be validated, and the result of validation. All presentations of the inexpressible and inconceivable that are made from the perspective of ordinary beings by conventionally referring to “ultimate reality” are nothing but a futile attempt to write words onto space. However, the Buddha and Nagarjuna explain that such expositions are still given for the sake of dispelling the wrong ideas of those who misconceive the two realities as something that has characteristics (such as real existence) versus something that is the fundamental nature of knowable objects. Particularly, if no presentation of ultimate reality is provided, profound true reality as it actually is will not be realized. The sutras say:

If the ultimate did not exist, pure conduct would be meaningless and the appearance of Thus-Gone Ones would be pointless. Since the ultimate exists, bodhisattvas should be skilled in the ultimate.

In summary, nonnominal, profound, and ultimate emptiness that is the actual object of the wisdom of noble ones is free from either withstanding or not withstanding analysis. As such, it is beyond expression. On the other hand, the nominal 281 emptiness that is the object of a correct reasoning consciousness is surely not something that can withstand analysis. Nevertheless, Centrists apply names such as “ultimate reality” or “emptiness” to that which is essentially without name and constitutes true reality. Thus, since they use such illustrating designations, one cannot say that Centrists are unable to conventionally express this ultimate reality. As will be explained further, this is an essential point in Centrism. 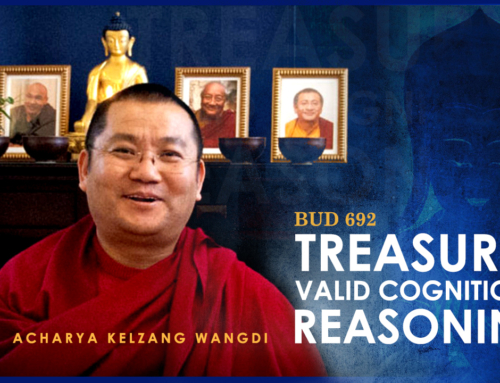